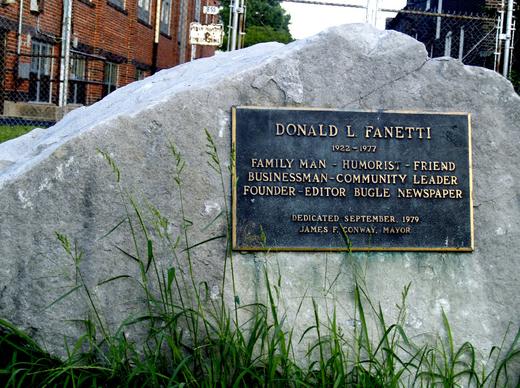 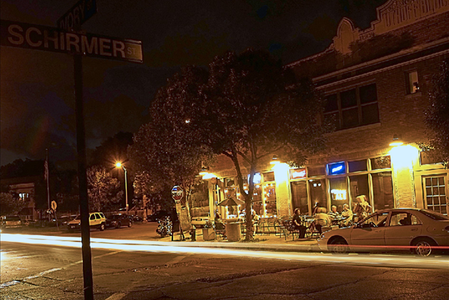 Although I did not have the opportunity to visit the park during the evening, it is obviously well illuminated. In addition to the lanterns that ring the stage area, there are a couple of other lanterns placed alongside the sidewalks. These, combined with the city street lights on Ivory, Shirmer and Steins. must keep the park brightly lit on even the darkest of nights. Somehow, this thought brings me great satisfaction as I conjure up pleasant visions of late night visitors walking confidently and securely along the park’s paths, happily making their way back to their cars and homes after a night at the theater or downing a few beers at the Bistro.

The school sits directly in line with the rectory and theater, in the northeast corner of Fanetti Park, at the intersection of Steins and Ivory. It is a large, sturdy-looking, two-story, brick rectangular building which, during the post-war years, probably housed close to 1,000 kids. I wonder how many attend the school now. There is nothing particularly architecturally significant about the building except for the classic Greek portico entranceway which extends all the way to the second floor, as well as the many large windows which run along both floors of the front and sides of the building. (I counted 18 sets of windows in the front of the building alone!) I’m sure these keep the rooms well illuminated, but given the age of the building, I can only imagine the cost of their gas and electric bills. There is a fallout shelter sign affixed to the exterior wall of the building, just to the left of the front entrance. I had to chuckle: I bet there isn’t a kid in that building who would understand the significance of that logo if you showed it to them. 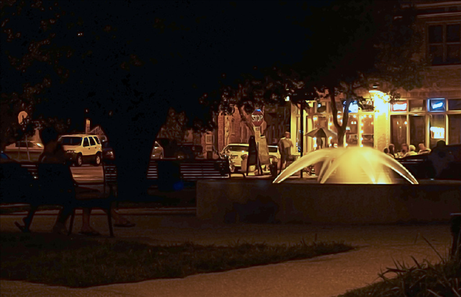 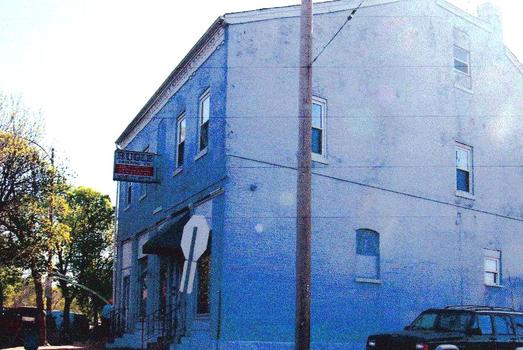 Leaving the circular sitting area, the wide sidewalk meanders towards the imposing and magnificent structure of the old St. Boniface Church, now reborn as the Ivory Theatre. The sidewalk is built on a curve and allows for a generous-sized drop-off area along Schirmer Street, just to the west of the theater. The drop-off area encompasses a beautifully-landscaped island containing an impressive row of “burning bushes” that have turned a fiery bright red in fall’s cool weather. I suspect that the drop-off area existed long before the theater, hearkening back to the days when gentlemen dropped their wives and daughters at the front door of the Church to spare them the humiliation of getting their fine Sunday shoes muddy. 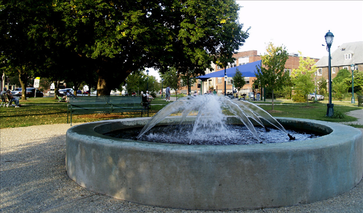 Tony and I run our fingers gently over the plaque’s engraving. My husband is deeply touched, not only by what he reads, but because his ancestors worked here too: quarrymen whose last name, “Pickel”, means “small pick” in German. Together, we read the inscription:

In 2007, St. Boniface, the Grand Old Dame and “spiritual heart of Carondelet”, was given a new lease on life after undergoing an $800,000 conversion as a performing arts theatre. The Ivory Theatre, so-named for the street which runs in front of it on the west side of the park, hosts a diverse offering of musicals, dramas, comedies, concerts, cabaret performances, and other types of theatre performances geared to people of all ages.

Immediately to the north of the theatre, connected by a wide sidewalk that traverses the entire length of the park, north-to-south, is the old rectory. Built in 1921, the rectory used to have the distinction of being one of the most beautiful and stately mansions along Michigan. (Michigan Street was closed to traffic in 1979 to make way for the new park and pedestrian traffic.)   The stone grotto at the back of the side yard, in the middle of the cloister walk, stands empty. I felt an overwhelming urge to kneel in this once-sacred place, and I wonder to whom people once prayed at this grotto: St. Boniface or the Blessed Virgin?

Fanetti Park—or to be more precise, Fanetti Fountain Plaza—is located in the heart of the “Patch” neighborhood, along the southwestern edge of St. Louis City’s historic Carondelet Neighborhood. This triangular-shaped grassy area, comprising 1.70 acres, was officially decreed a City park in 1979. Bounded by Steins Street on the north (the apex of the triangle), Ivory on the west and Schirmer on the south, Fanetti Park and the surrounding neighborhood have been revitalized in recent years with the strategic influx of entertainment and recreational venues, as well as a number of inviting-looking eating and drinking establishments. 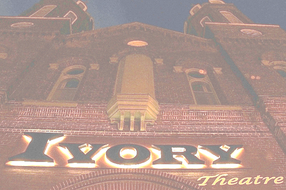 On Sunday, I come back to the park with my husband, Tony.  I show him the Church which he swears we attended at least once—was it a fish fry?—when the kids were still babies almost 30 years ago. I take him over to a boulder, roughly the size of a fat VW—probably hewn from the Mississippi Bluffs, not more than a mile from where we stand. The boulder is strategically placed in the middle of the park, just to the left and behind the staging area where it can be easily viewed from the driver’s window. I remember once reading a story about a boy who would travel to the past by moving a boulder and climbing down the long magical stairway that lay beneath. I can’t help but feel like I am opening a family album.

Just inside the southwest corner of the park—near the intersection of Ivory and Schirmer—a wide sidewalk leads to a lovely circular sitting area, the centerpiece consisting of a large fountain, approximately 10’ in diameter. When I visited, the fountain had been turned off and boarded up for the season. Undeterred by this sure sign of winter’s approach, I sat down to enjoy the beautiful fall day on one of the four, 8’-long, green iron park benches that ring the area. Behind each of the benches are large old trees—mostly hackberries and ash—obviously tended to with great care through the years, perhaps by the good Sisters of St. Joseph themselves. Their thick foliage and long branches extend to provide a blessed spot of shade for the mothers and babies, the young lovers, and the weary older couples who stop for a rest, if only momentarily.

The old St. Boniface School, originally built in 1948, now houses the Carondelet Leadership Academy, a St. Louis City Charter School, kindergarten-fifth grade. The school has a curved, semi-circular driveway that runs to the north of it, directly off Steins Street, where I suppose parents and faculty used to park.

My husband wonders aloud if his father, who also worked as a journalist, might have known Mr. Fanetti. Surely the two of them must have encountered one another at some point. We leave the park and walk down Ivory, past the Carondelet emblem painted onto the street, marking the boundary of the old City at the three-way intersection of Virginia, Courtois and Ivory.

I am on a mission.

Then I see it: a gray, two-story nondescript building on the corner of Primm and Ivory—7832 Ivory—“Bugle Printing Company: World’s Softest Newspaper”.

Looking south and west, just catty-corner from the park in front of the Stacked, there is a second smaller park—a tribute to Albert “Red” Villa, former longtime Alderman of the 11th Ward and one-time close friend to Donald L. Fanetti. Remarkably, this park contains what appears to be an almost identical fountain. I have heard that the two fountains were designed to intentionally create the effect of visual and sound interplay, leaving one with the distinct impression of old friends exchanging their thoughts on the street corner where they once huddled and swapped stories so long ago.

Dedicated to the preservation of the legacy of Donald Fanetti, the Bugle, and Fanetti Park 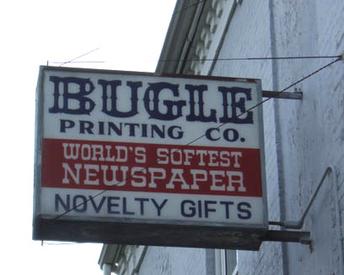