Dedicated to the preservation of the legacy of Donald Fanetti, the Bugle, and Fanetti Park

Beth filled the evening with sounds of America on Tuesday evening July 12th as a waxing moon rose over the twin towers by the plaza. The fountain of clear water spoke of fluidity as folks gathered to enjoy the Bombara creations of auditory delight, of guitar and bass and voice. The heat of the day had passed and light faded as we sat, enjoyed a cold brew or just a cool drink to sooth the heat. The blue sail moved us down the river of time, past the red bricks of the old neighborhood, into an America without troubles or issues, filled with the possibilities that Beth created. A wide assortment of folks displayed their garb of uniqueness as marines and engineers sat with teachers and cooks, becoming just people of the Patch in the southern section of this old French city by the river. Beth catches a phrase, music fills our minds and takes us on a trip upon a magic swirling ship. We go on a journey in our imaginations, the past meeting the future, dreams growing silently in the dark soil of our lives. Night hawks patrol the darkening sky, dancing their winged way, rising high, swooping low. Now the moon is farther from the steeple as the earth turns round and we sail gently down the stream of today into tomorrow. Neighbor greets stranger knowing we're all neighbors – there are no strangers. Time does its thing, song follows song and soon the moon has moved, the earth turned, the light faded. We pick up our chairs, say goodnight, and go home to dream on, each one in their own sleep of memory.

Aug 2 Night Out by
The Patch Neighborhood Association

The Fanetti Park Surprise continued on August 2nd as Colonel Ford, the band, set down roots under the blue cloud by the fountain in The Patch. Free food for all provided by St Trinity Church made this National Night Out a memorable gathering accompanied by fire fighters and a fire truck. Angel Tutt with The Patch Neighborhood Association and Carolyn George with the Carondelet Community Betterment Federation made it all happen. A steel guitar electrified the atmosphere and the sound of rural music reminded this urban site that it too was once a rural spot. Ozark mountain vibes rolled down to the river to this patch of green here by The Lou. The sound of the Colonel Ford musicians sparked a new hope in the minds of the pluralistic Americans gathered under this summer evening sky to bask in the glow of creation still flowing from the original beginning. As the night closed in folks were called to move in time with the music and danced their joy in front of the crowd. Bearded dudes showed their love of the old time sounds, guitars wailed, a bass boomed, drums beat, burgers cooked, watermelon soothed, and a group of guys shared their love of hillbilly with a crowd of appreciative neighbors. Mr. Rogers would have approved.

Our Location in Saint Louis, Missouri 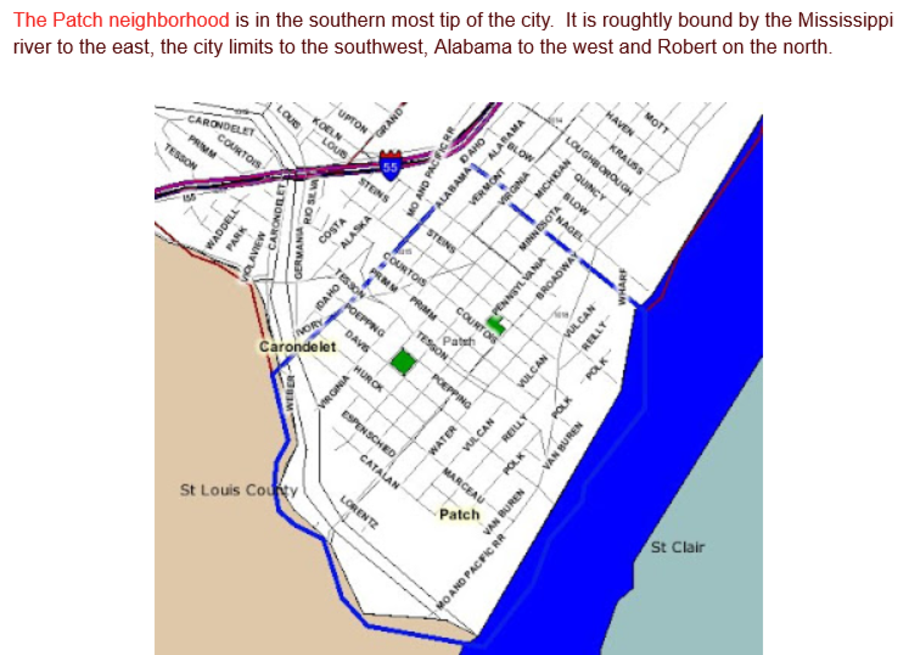 On July 19th Fanetti Park hosted another evening of sound vibration as Love Jones did their thing under the blue sail by the twin towers in the Patch. A whole new crowd of folk gathered to allow the vagaries of the day wash away under the summer evening sky. The fountain again accompanied the musicians with a gurgle and a woosh, the trees resonated, ear drums moved with delight as a spontaneous combustion of instruments soothed and wailed, pranced and danced, and mellowed and chided the spent emotions of a long day. A vendor of fruit and vegis colored the crowd with a tie dye T-shirt of rainbow colors. Val and Sal came and went. Kendall wandered about taking photos. A whole parade of children sat and bounced, spied and laughed and whirled at the shenanigans in their minds. The crowd's thoughts flowed onto the beach of Fanetti Park with gently rolling waves of association as the music pulled them ashore. There they basked in the light of the stars, faces beamed, talk flowed, friends friended, and neighbors renewed the American summer in this land by the river in The Lou where music spread from block to block, and parks connected people to plants renewing their wholeness. 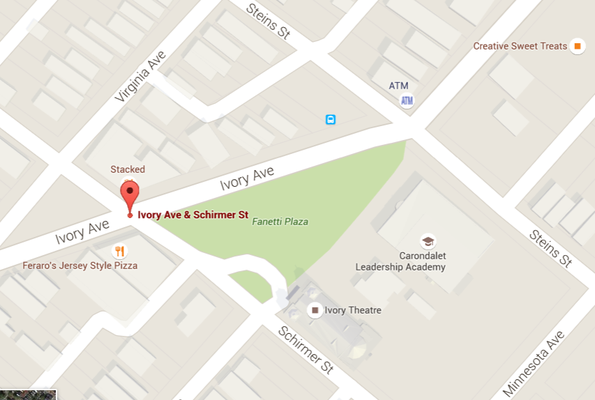